Image by Tumisu from Pixabay

Why climate data for health?

Climate varies by location according to defined processes and has distinct cycles – diurnal, seasonal – as well as multi-year cycles such as those driven by El Niño.

What makes climate unique is that it is routinely measured – using land and sea observations, satellite-based remote sensing and global modelling outputs – modeled and predicted using standardized methods.This highly structured mass of data, in national and global repositories, provides hourly, daily, weekly or monthly information for most regions of the planet.

Health practitioners can use climate data to improve routine planning and surveillance, and preparedness activities to prevent and control specific diseases. They use the data to:

Sources of weather and climate data

Local station operators compile daily or monthly reports which they send to the NMHS head office electronically, by radio or on paper.

The NMHS cleans, curates and archives the data in a central repository and uses the data to develop and test climate products which it shares with partners or clients free or for a fee. The NMHS may automatically communicate some daily data to the WMO’s Global Telecommunication System which provides the Global Weather Watch.

Other organisations and individuals may collect weather and climate data, for example schools, agricultural research centres, and farmers. Some health facilities manage weather stations for their locality. Records from these volunteer stations vary in quality and consistency and may not be integrated into the NMHS historical archives.

Ground-based observations are the gold standard for weather and climate data.

Choosing which data to collect

Researchers have to balance ease of access to climate data with data quality. The most accurate data come from local meteorological stations but, when they are not available, researchers resort to using global products (which may be calibrated using a subset of local observations).

Data errors for researchers to control for when analysing rainfall and temperature are:

Different gridded satellite rainfall estimates exist and may give different results for the same area. Which data set should be used? The best product will likely be the one that is calibrated using the most ground observations in the area of interest. Users can usually find this information in the documentation for the specific product.

Why model climate and health data? 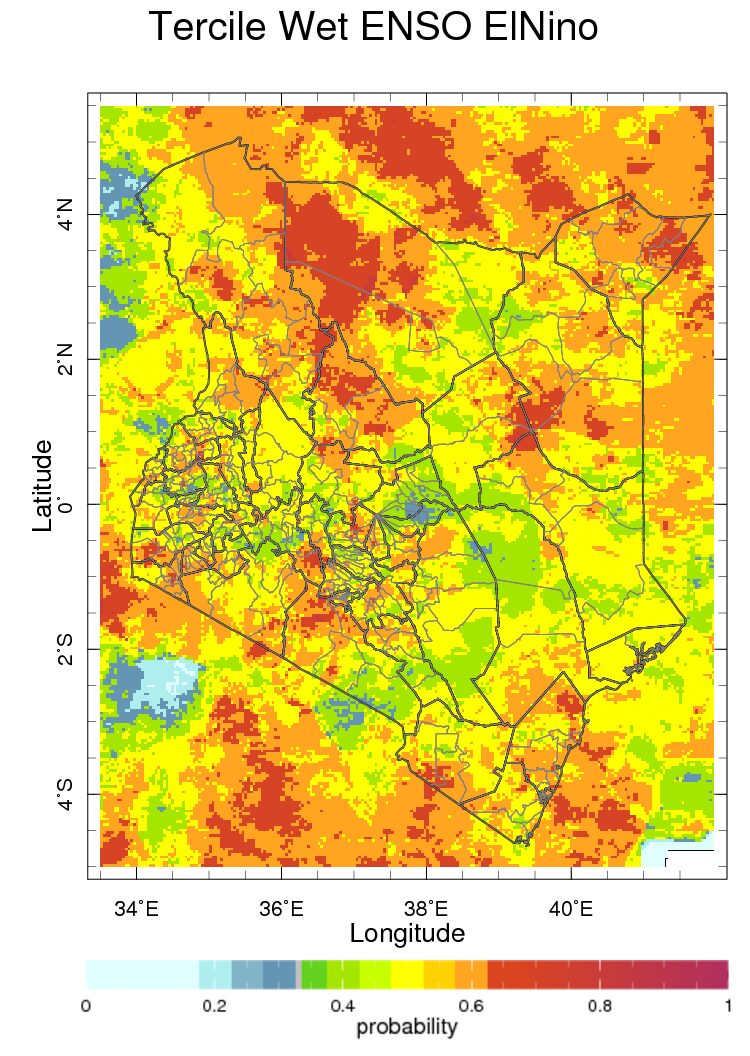 Map of the historical probability of seasonal monthly averages conditioned on El Niño in Kenya for seasonal average rainfall for October to December season.

Maps best visualise geographic distributions, seasonal patterns and year-to year-variations in risk over a region. But attractive as they appear, maps simplify reality.

Choice of spatial and temporal scales influences interpretation. There are many ways to develop epidemic thresholds which give very different results. Although there are usually optimal spatial or temporal resolutions that provide greatest specificity and sensitivity, researchers take into account data availability when choosing between models, and there may be political considerations.

It is important that researchers explain what the maps mean to health planners.

WHO has prepared a framework for malaria early warning systems (MEWS) incorporating seasonal forecasts, rainfall and environmental monitoring and health facility surveillance which forms the basis for development of MEWS in different regions of the world.

The following climate variables that can predict malaria outcomes weeks or months into the future.

Thomson et al. provide a detailed description of available climate products for use in malaria control and elimination.

Zika virus (ZIKV) epidemics emerged in Latin America and the Caribbean in 2015 during a period of severe drought and unusually high temperatures which, Muñoz et al. showed to result from a combination of natural climate variability and long-term changes.

Warming temperatures increase development rates of both vector and virus. The study concluded that climate is a significant driver of seasonality, year-to-year variability and longer-term trends in the geographic distribution of ZIKV and other arboviruses transmitted by Aedes mosquitoes. The authors recommended that public health officials work with climate experts to use climate information to improve the timing and targeting of ZIKV interventions.

A preliminary study undertaken for the report indicated that seasonalrice production increases with the extent of the annual flood to a point after which flooding damages the crop. Monthly percentages of underweight children showed positive association with high prices and flood extent.

These results are consistent with evidence that high rice prices following production shocks (including those associated with climate events) strongly associate with people’s choices to spend less on non-rice foods (with higher densities of micronutrients) and increases in the number of underweight children.

Questions for a planner who wants to coordinate climate data systems with health information data on a routine basis.

While many in the climate and health communities recognise the benefits of incorporating climate data and information into health decision-making, they face challenges in making this happen. The two communities have long-established methods for managing data within their sectors but have less experience in sharing data with each other.

A significant challenge is lack of access to quality data from country meteorological agencies. As a consequence, local and international users turn to freely available global products despite their quality limitations. Global products contain a fraction of the detail of locally recorded NMHS observations, and users may not fully understand their relevance and quality.

A remaining challenge is the capacity of health practitioners to value, collect and analyse climate data in health. Ministries of health need to partner not only with climate experts but with academic epidemiologists with technical skills. Few health training initiatives, whether in public health, medical or nursing schools, include a practical understanding of climate in their curricula. New initiatives are emerging that bring awareness of climate change, and knowledge about climate data and information to the health sector. The Global Consortium on Climate and Health Education, launched in February 2017, focuses on integrating climate into core curricula of today’s health professionals.

The Enhancing National Climate Services (ENACTS). ENACTS works directly with the NMHS to combine observations from the national observation network with global products – that is, satellite estimates for rainfall, and digital elevation models and reanalysis products for temperature. ENACTS also develops data and derived products and disseminates them via maprooms on the websites of the NMHSs.

Climate Information for Public Health. This is an open access book edited by Madeleine Thomson and Simon Mason.